Thanks to everyone who came out to Tour//Creo on Friday night.

We had a great turnout and a lot of fun celebrating the new space.

If you missed it, contact us to set up a time for your own tour.
We've been collaborating with photographer Brian Kelly on a couple of very cool projects lately.

Visit Brian's blog to see photos from yesterday's short film shoot, then scroll down to see his shots from the Glen Phillips and Jonathan Kingham show at The Photography Room on December 4. We recorded audio for Glen and Jonathan--they are both amazing artists.
The Business Review wrote this story (also below) on our studio launch. Remember to check out our launch party on Friday, December 12 from 6-10 p.m. at 40 S. Division.

Creo Productions in Grand Rapids may be small in size, but the three-man film studio has big visions.

And it's growing, despite Michigan's economy.

Aaron Carriere and Andrew Tingley, both Ferris State University graduates, founded Creo in August 2006. Carriere said they wanted to start the company because they have an "entrepreneurial spirit" and both enjoy video production. He also stressed that there is "a lot of power in storytelling."

Creo launched at the infancy of a new news media, Carriere said -- and there is a lot of potential in new media. With video, social networking and mobile communication a growing part of American culture, Creo Production believes it is ahead of the curve in the role of video and new media.

Creo uses its talents to provide clients with strong video footage and projects that tell people what is going on worldwide and in Grand Rapids.

"I really love telling stories through moving cameras, beautiful cinematography and translating what I see in my mind to the screen," Tingley said.

The Grand Rapids location has helped Creo's growth and success.

"The people here are great," Carriere said. "People are willing to connect and meet with you, and we're collaborating with others who have similar visions. There's also great energy having a studio downtown in Heartside, and we're excited to see downtown continue to grow and evolve and be a part of that."

When considering a starting location, Carriere said, "We wrestled between Grand Rapids and Nashville. We decided to stay in Grand Rapids, because we had existing connections and a base to build our business."

With Michigan's film incentives creating buzz across the state, Tingley said it doesn't have a direct impact on Creo Productions, because it doesn't include commercial work, but they love the publicity for Michigan and possible independent opportunities for their company down the road.

"While economic times are difficult, we're in an industry that's growing and evolving," Carriere said, crediting much of Creo's growth to the convictions of its founders. "Without passion, it would be hard to make it."

In 2008, Creo's sales "are well over double what they were in 2007," and projections are positive for 2009 and beyond, Carriere said. That growth has allowed expansion options. Creo is opening an audio division, Carriere said, and its space is perfect for additional growth.

"We're still determining our ideal size, but we like being lean and flexible to adapt to change, and there's a lot of opportunity for collaboration with skilled people we're connecting with," Tingley said.

Being a small business allows Creo to invest in its clients and offer a high level of service. At larger companies, a client may never meet the group working on their project.

"With our company, you'll know everyone involved, and that's a big advantage and makes it more fun to work with us," Tingley said.

Being a small company gives Creo "the ability to adapt quickly to change," Carriere said.

In the next five years, "we'd like to have a balance of creative, cutting-edge projects in the business world, as well as the ability to explore our own independent ideas, whether that's film or documentaries or a combination of both. There's a lot of potential in new media in the coming years, and everything is changing so quickly," Carriere said. 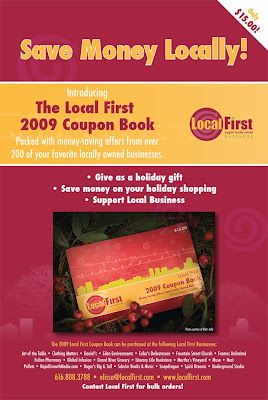