<!-- Facebook Badge END -->
Click to read a cool story on the "social experiment" of the live/work spaces we live in on Division Ave. downtown, including some excellent photography of Verne Berry Place and our new neighbors.
The story is also a profile of our great landlord, Dwelling Place.
It's that simple: you have a story to tell. It may be about commerce or innovation or perseverance. It may be personal, historical, musical or emotional. But it's unique to you.

Simply put, that's our question to you in these times. We're advocates for storytelling, and believe there's more out there than nightly newscasts on recessions and job cuts and pending doom.

I've heard over-and-over from people I trust that the resilient will make it, that hard times bring forth the greatest innovations. This is not time to sit back, it's time to act.

To go against the grain of the nightly news, I'm making myself available free-of-charge to listen to your story, to talk about ways our media (video/audio/creative) can help bring your story to life.

Kelly Quintanillia from Rapid Growth wrote a nice feature story about local audio studios, including our studio at Creo Productions and our band Courier. Make sure to click here for the story, featuring photos of our studio and session with Brian Vander Ark.

When the local band Courier decided it was time to record an album of its original music, band members lugged recording equipment and instruments to the far reaches of metro Grand Rapids: to the home of guitarist Aaron Carriere, the band room of lead singer Dan Kilpala's high school, even the foyer of Kentwood Community Church.

But now when Courier records music, it does so in the confines of the cozy recording studio owned by Carriere and business partner Andrew Tingley along the Avenue for the Arts, part of a small but increasingly important local recording industry made possible by the plummeting cost of electronics and software and entrepreneurs with dreams.

Solo musicians and area bands are now emerging from gasoline-laced garages and dank basements to record their artistry at studios because the cost of that work has dropped from tens of thousands of dollars to produce an album to hourly rates of $50 to $200 an hour.  The cost to use a recording studio has reached the point where a struggling band can risk recouping its investment through sales of compact discs and extended play songs sold online.

And the beauty of local recording services is the most important quality of all: sound.   Just ask musician David John, who released his second album “Looking For Opal” in April that he recorded at Sound Post studio with the help of owner Stuart Poltrock.   “Stuart and I wanted the record to sound like it could have come from anywhere,”  John says. “We wanted it to have really solid production values.”

After four years of fine-tuning in the studio, John says of his album: “Whether you like the music or not, you’d have to agree that it has world-class production values.”

Time was when only well established bands bankrolled by the major record labels could afford to record albums that were pressed into vinyl or later burned on CDs. The recording process was tedious and expensive: endless hours spent by audio engineers literally cutting magnetic tape with razors and splicing it back together.  But now that sound can be isolated, edited and mixed digitally for a fraction of the cost and time by anyone willing to invest in electronics and master the use of software programs.

“You can go to Guitar Center and buy Pro Tools and invest in microphones, maybe spend $10,000 and really do something amazing,” John says. “There’s been a dramatic shift in the ability to get recorded and do it in a professional way.”

Poltrock says that the widespread use of digital recording combined with the rock-bottom price point to enter the business has led to more local audio studios cropping up to help musicians and companies record professional audio. “There are many, many more small business and home recording setups, now more than ever,” he says. “They are capable of doing what only a large commercial studio could do a few years ago.”

Another local studio, Acoustic Arts Custom Music Production, was started a decade ago when Roger and Megan MacNaughton decided to turn their expertise and passion for music and recording into a business of their own.

Acoustic Arts carved its niche as a music project recording studio, instead of also delving into corporate voiceover work. When working with companies or nonprofit organizations, Acoustic Arts focuses solely on the music, whether it's underscoring a documentary or writing a children’s rap song, as they were recently tapped to do for Kids Food Basket.

With more than 25 years of experience as a recording studio creative director, Roger grew up working with analog recordings. “When everything was done in analog, only studios with large budgets could afford to record,” says Megan. “Now that everything is digital, the costs have come down incredibly.”

But Poltrock cautions that while it may be financially feasible for musicians to record themselves, that doesn’t necessarily translate to the most efficient process.

“Some bands and musicians can pull off a great project and recording by doing it all themselves, but most get stuck somewhere in the process,” he says. “Having a producer to envision the project, design the way to completion and see that it gets done makes a lot of sense. This lets everyone focus their time and talents.”

While the cost to record in a professional studio might serve as a barrier for musicians operating on a shoestring budget, it can actually save money and frustration in the long run, as trained professionals are able to make edits more quickly. Studios typically charge either by the project or at an hourly rate. This can be a more viable option for musicians and businesses that don’t have the funds, expertise or desire to purchase their own recording equipment.

“Technology has helped a lot of people enter the field and has made it more accessible, but it’s still an investment,” says Carriere of Creo Productions, the three-man studio located at S. Division and Weston.

“We invested in the room and the equipment and put in a lot of sweat equity to get where we are now and to set us apart from the basement studios.” Creo Productions began as a video production company in 2006, before adding an audio studio in December and then bringing Korn onboard full-time as an audio engineer.

For their first major audio project, they recorded musician Brian Vander Ark to provide the audio for the Celebrate Heartside video.

“There’s a lot of crossover between audio and video,” says Carriere. “We can offer our clients a better product, and there’s more consistency because it’s all done in one place rather than as a collaboration between a few different studios.”

Carriere and Korn now use Courier as the studio’s in-house band, providing original music for their corporate clients. They’ve found that their experience as a performer can provide an advantage when recording other musicians.

“We have a soundproof studio and great sound equipment, but Matt has the ear for adding effects and other things that most people wouldn’t pick up on,” Carriere says.

Megan of Acoustic Arts agrees that having help from someone with a background as a performing musician can lead to a better finished product than a musician might get if recording on his own. “It’s nerve-wracking to perform, and Roger knows how it feels,” she says. “Because he has been on both sides of the microphone, he can get better results because he gets the best out of people.”

And with the quality of work being produced by an increasing number of local studios, there’s no need to travel to a larger city to produce a professional recording. “Musicians can stay local and get an excellent product,” says Megan. “There are a number of good studios around here, you just have to interview the studios and listen to samples to find your fit.”

That’s a welcome development for musicians who want to get their music heard, but don’t want to uproot their lives to move to a larger city.  “Twenty-five years ago when everything was run by the big record companies, musicians had to go to Los Angeles, Chicago or New York City to get attention,” says John. “Due to the success of independents, now you can release a record from anywhere, whether it’s Lowell or Chicago.”

Kelly Quintanilla is a freelance writer born, raised and living in West Michigan. She is also the marketing director at Ada-based CUSO Development Company. 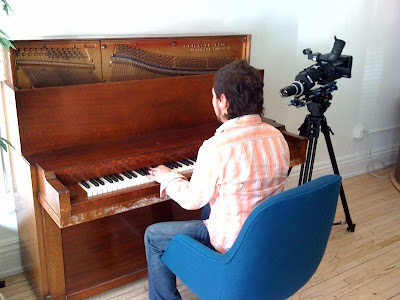 Two new arrivals in the last two days (and one in the last month).
Yesterday, we welcomed an upright baby grand Grinnell Bros. piano, manufactured in Detroit. It's going to take some skills to get it downstairs to the studio, but it'll be well worth the effort.
And today, our Letus Elite film lens adapter arrived in the mail.
The Letus allows us to shoot with interchangeable prime lenses on our HDV camera, capturing a more cinematic look and numerous depth of field options to our videos. It's really an amazing piece of equipment. We're ready to start using it and showing our clients.
(Seated is Matthew Korn, our audio engineer, who started full-time last month. He's the guy who can capture that vintage piano sound).
<!--StartFragment-->

The West Michigan Film and Video Alliance (WMFVA) has awarded Creo Productions the highest level 4 STARMAP rating in the "Video for Web" category.

The rating is on a four-point scale, with a category 4 recognized as an “Established top service provider in the region,” based on a committee of industry peers. STARMAP is a searchable database for assembling production teams.